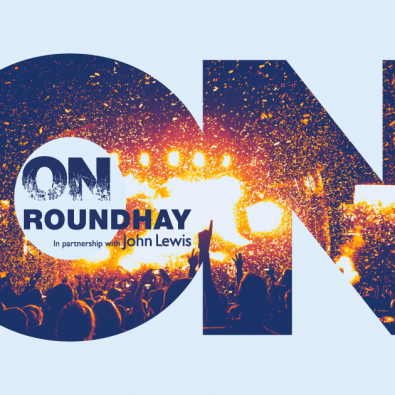 FOR THE FIRST TIME IN 10 YEARS

THE FIRST EVER MUSIC, FOOD AND FAMILY ENTERTAINMENT FESTIVAL TO BE HELD AT ROUNDHAY PARK

Harvey Goldsmith is proud to announce OnRoundhay Festival in partnership with John Lewis, a brand new family, music and food festival in Leeds. Taking place in the stunning surroundings of Roundhay Park on 17 September 2016. OnRoundhay is the ultimate day out for standout live music with mouth-watering food and drink experiences along with a fun-filled program of entertainment for all ages, where under 12s go free!  Tickets are on sale 9am on Tuesday 5 July and available via See Tickets.

Confirmed for the inaugural festival is a fantastic line-up of amazing artists including the multiplatinum-selling James, fresh from their triumphant set at Glastonbury. Their new album ‘Girl at the End of the World’ surged to number two in the album charts earlier this year. The ‘Sit Down’ and ‘She’s A Star’ group will co-headline alongside Scottish rock legends Primal Scream, who’ve had another incredibly successful year with the release of their new Top 20 album ‘Chaosmosis’ and a string of critically acclaimed live performances.

London four-piece Wolf Alice are undoubtedly one of the breakthrough bands of the past year. Having successfully torn up the indie rulebook, combining candyfloss melodies with a stridal grungy edge, the Brit and Grammy-nominated band will be sure to thrill the OnRoundhay audience. Iowa’s Max Jury promises to delight fans with his heartfelt, country tinged and perfectly executed indie-pop. Leeds 7-piece The Haggis Horns will bring a live funk extravaganza; combining funk, soul and hip-hop guaranteed to get the crowd grooving. With more acts to be announced, OnRoundhay is already shaping up as the must-go to event on the Yorkshire calendar.

Working in partnership with Leeds Indie Food, the John Lewis Food Village will make its OnRoundhay debut, packed with dining experiences, demonstrations, celebrity chefs, pop up stalls and street food to whet any appetite. A feast of tastes and cuisines will be on hand all day to accompany the world-class line-up of music and entertainment.

Puffin World of Stories will bring a unique and magical experience to entertain children of all ages with some of Puffin’s most adored and iconic book characters. The world Puffin will create includes a Magical Storytelling Stage with live storytellings and shows including CBeebies favourites The Clangers and The Wimpy Kid Show, a must for Diary of a Wimpy Kid fans and great family entertainment, including a Wimpy Kid Draw-Along and Wimp Wars! Quiz. Against the picturesque backdrop of Roundhay Park, the Village Green Sports Day will offer book-themed delights such as egg and spoon races and sack races,there will be prizes for kids who come dressed as a book character and arts and crafts activities to enjoy. Children will also have the opportunity to meet favourite characters from the wonderful world of Puffin including Spot the Dog and Peter Rabbit.

Working closely with Leeds County Council; OnRoundhay will offer the local community a memorable experience, bringing live entertainment back to the historic green space of Leeds Roundhay Park. OnRoundhay will be the first large scale event of its kind since Robbie Williams performed there 10 years ago. Legendary promoter Harvey Goldsmith previously promoted gigs on the site with the likes of Madonna, The Rolling Stones and Bruce Springsteen.

Harvey Goldsmith CBE added, “I am really pleased to be back presenting a show in Roundhay Park. 3 years ago we created with John Lewis a brand new style of Festival called OnBlackheath, this was universally received by artists, performers and the public. We are delighted to be able to extend this brand by producing the first OnRoundhay Festival with John Lewis as our partner. The event will follow the same format as OnBlackheath, with fantastic music, great curated food and lots of activities for kids of all ages. I would like to thank Leeds City Council for their help in making OnRoundhay happen.”

Councillor Judith Blake, Leader of Leeds City Council, said: “We are delighted to be welcoming the OnRoundhay Festival this September to our very own Roundhay Park, which over the years has hosted concerts by some of the world’s biggest and most iconic artists. It is fantastic therefore to see live music back at Roundhay Park, and to see John Lewis who are opening a new flagship store in Leeds, playing a part in the city’s wider cultural offering.”

Rachel Swift, Head of Brand Marketing for John Lewis said, “’We are delighted to bring the unique mixture of great music, outstanding food and all round family fun that has made OnBlackheath such a success to the people of Leeds and the beautiful setting of Roundhay Park.  We believe there’s no other festival like it and we are proud that John Lewis has been an integral part of its success”

OnRoundhay is the new sister festival to London’s On Blackheath. See below what critics have said about OnBlackheath:

“A perfect blend of good food and fantastic music. An all-ages carnival atmosphere” – The Times

“One of London’s most anticipated festivals” – NME

“OnBlackheath is definitely worth a second date next year” – Evening Standard

Tickets are available with no booking fee until 10th July.

Tickets for OnRoundhay Festival in partnership with John Lewis are on sale at 9AM Tuesday 5 July and available via See Tickets.

Tickets are subject to booking fee.